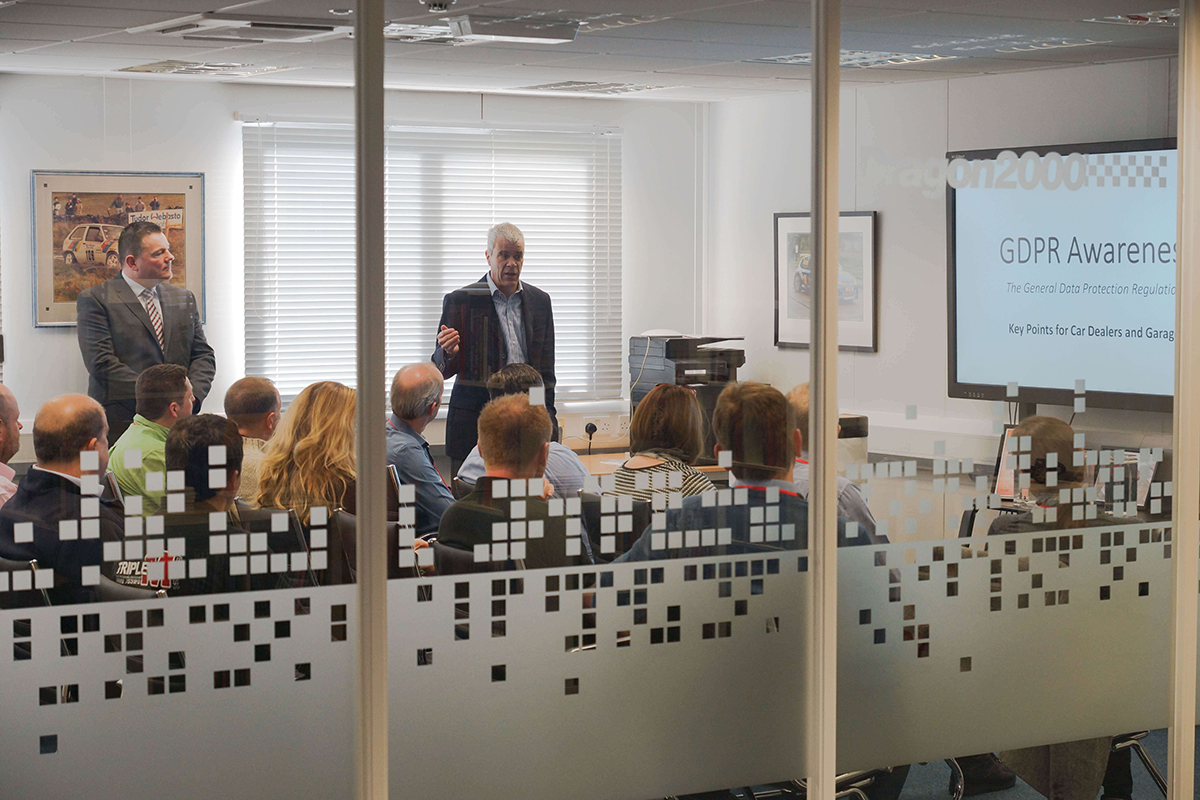 With GDPR upon us all, we thought that it would be timely to share some of the motor trade specific questions that were posed at our recent car dealer forum events at Dragon2000.

As you would expect, much revolved around consent and email marketing, all of which can be accommodated within the new features of our dealer management system.

However, some issues were less obvious, none were crazy and, as ever, no one has a definitive answer.

From January, in preparation for GDPR, the DVLA began issuing vehicle logbooks (V5C) without the previous keeper details. The current owner is obviously documented but concerns were voiced about the ease with which a jaded previous owner can be expunged from the V5C.

This, coupled with the current fervour around the mis-selling of ex-rental and fleet cars is surely going to present a problem where, to comply with GDPR leaves the car dealer unable to declare the heritage of previous keepers.

Historically, the DVLA has, for a small fee, provided a full list of previous owners on request. This is no longer the case unless there is just cause – fraud or a criminal case etc.

As a by-product of this, issues arose regarding the valuation of celebrity-owned cars where a significant proportion of the car value lies in it having been owned by someone famous. If the details are no longer available, how do you verify the car’s provenance?

Equally, a dealer who really does have an A-list clientele told how a previous owner had bought back a car that he had previously owned as he was sick of people calling up to see if he remembered the car, so, I suppose it cuts both ways.

Many asked about redacting previous keeper details from Service Books or piles of old invoices that prove the car’s ongoing maintenance. Generally, the opinion was that this sort of side-effect is not what GDPR was designed to protect against but in this case, a belt-and-braces approach would be to remove names and addresses from documents, leaving the work details intact.

Most cars from the previous 15 years have some form of integration with user’s mobile phones and, on disposal, walked away leaving a phonebook and contact details migrated from a smart phone. This is clearly personal data and should be deleted from a car that you are selling.

Similarly, satnav systems have ‘Home’ identifying the previous owner and any previous journeys should also be deleted pre-sale.

On the flip side, several dealers had exposed clocking of high value cars by way of the satnav history with a couple of trips to the South of France clearly being more than the 600 miles showing on the dashboard…..

Multiple attendees reported finding documents with personal details in the car to the extent that two had installed shredders in their valeting bays to dispose of paperwork. This included PCP contracts with credit card slips stapled to them, job applications and bank statements.

All of the above points have a direct impact of car dealers doing business regardless of how seriously they take GDPR. Most understand the need for data protection but the regulations seem to be implemented with a single goal in mind and cut across previous safeguards that were surely put in place for a reason.

The team at Dragon2000 have been voluntarily registered with the ICO for over 12 years rather than a spur of the moment decision last week. So, I’d hope that we understand more than just the basics of how data protection fits both within the motor trade and specifically within our Dealer Management System.

Dragon2000 have been helping dealers and garages drive their businesses forward since 1995. Talk to our team today on 01327 222 333 or email sales@dragon2000.co.uk to find out how our dealer management system, car dealer websites and mobile apps can help your business increase profits and reduce costs.

Why Should Car Dealers And Garages Invest In A Dealer Management System?

Any cookies that may not be particularly necessary for the website to function and is used specifically to collect user personal data via analytics, ads, other embedded contents are termed as non-necessary cookies. It is mandatory to gain your consent to enable these cookies and store them on your browser.